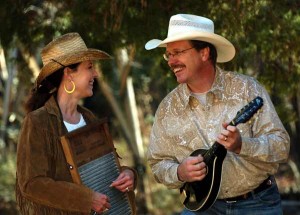 “The Barfield’s” are two of the most entertaining and diverse artists in the industry today.  From the foothills of the Blue Ridge Mountains, with a respect for tradition and a passion to perform… the “Barfield’s” are serving up a delicious mix of truly “American” roots music to produce their own distinctive sound!

Traditional Country & Western Swing, Folk, Bluegrass, Old-Time Gospel, and Jug-band music make up just a few of the ingredients that go into the pot to make this unique “Upcountry Stew!”

With a “roux” made from their distinctive vocal harmonies, traditional instruments, and a very honest, natural, down to earth rapport with the audience, they’ve been winning fans and making friends at every event they have been invited, and “consistently re-invited” to for nearly two decades

Gregg “Buffalo” Barfield is from Greenville, South Carolina.  He’s a multi-instrumentalist, singer/songwriter, storyteller, and teaching artist for the SC Arts Commission. He has written songs in several genres including traditional country, folk, bluegrass, gospel and children’s music. He began performing professionally in 1994 when he took a position with the Alabama Theater in Myrtle Beach, SC.  He spent the next four years honing his craft, and developing into a full fledged artist & entertainer while working with the Alabama Theater!

His wife, Dena Michele Barfield, aka. “Miss Bumadean” is an artist in her own right.  From Pendleton, South Carolina, she’s a singer/songwriter, percussionist, and visual artist.  She adds the essential components to the Barfield’s distinctive sound…… a sibling like vocal harmony, and a distinctive washboard rhythm which blend to give their music an truly authentic sound!!

Together, “The Barfield’s” have went on to work as touring artists presenting concerts, workshops, outreach programs & residencies at many respected music festivals, fairs, arts centers, churches, and listening rooms.  ………..they have traveled throughout the Southern states and all across the Adirondacks, Upstate New York, and New England……….. they perform more than 200 shows a year, and have been a regular featured artist at the nationally acclaimed “Merlefest” music festival on the “Little Pickers” and “Homespun Video” stages for the past 7 years.

Gregg Buffalo Barfield is on the SC Arts Commission’s list of approved teaching artist!  Together they have presented interactive concerts featuring old-time

Appalachian instruments like the washboard, spoons, kazoo, jug, and the washtub bass!  Audiences both young & old can learn the folk history, and have the opportunity to take part in a hands on demonstration during Buffalo’s “jug band jam!”